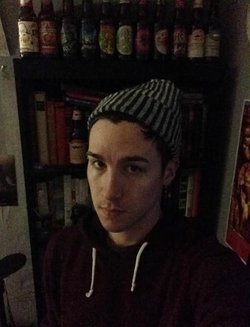 I really hate talking about myself, and I don’t want to pull some artsy-fartsy stunt and say “read my work to find out” and so I guess I’ll just go for it. I was born and raised in Queens NY (accent included) to an Italian-American family (Stone is a pseudonym), the second born of 6 boys (two different wives) and certainly the most mischievous. I’m gay, married (because now I am finally allowed to be), I love spicy-sweet Doritos and craft beer. Music is the key to my survival; the written word is in my very DNA. My favorite bands range from (and everything in between) Black Sabbath to Fleetwood Mac; The Cure to Tool. Madonna to Lana Del Rey. And apparently I love to use parenthesis.

I don’t think I ever approached writing as an outlet. Writing, as it turns out, approached me. My parents divorced when I was 9. What was once a portrait of an Italian-American family fell completely apart. I found myself more alone than not during those times, and it was books that brought me solace. They taught me that I could escape into my own head and block everything else out. I stumbled onto the horror genre for the scare-shock factor, but also to read about people whose lives were worse than my own. When I hit my early teens I joined the goth-metal-punk-emo-I-wear-only-black sub-culture and stayed in it right up until my early 20’s. But that way of life really helped me find my way. Be it the music or the books or the art or the people, it opened my mind and made me realize that I wanted to be a creator. It started out with me mocking song lyrics, but immediately found that it never felt right, and so one drunk night I began to try my hand at crafting short stories. I sold my first short story in 2009 for $25 bucks which gave me the confidence to keep going. And now here I am two novels, a novella and myriad short stories later.

My story in Turn to Ash Vol. 1 deals with Dorian and Tyria, best friends haunted by their own vices and their own art, but who both seek to know why Tyria’s shadow has a mind of its own. This story is an important adjunct to my second novel, Blood Kiss, and so if you want to find out more about those two, pick up the novel when it drops. I wrote this story halfway through writing the novel in order to understand my characters better. It was such a fun experience.

Support the small press. The big 5 publishers have enough money.

You can pre-order Turn to Ash, Vol. 1, which feature’s J.’s story “What Makes a Shadow?” – HERE – It will also be available from Amazon and Amazon UK in the last week of August.